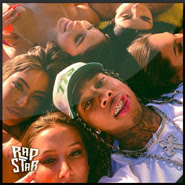 [Part 1: Tyga]
She gon’ do some wrong (wrong), but the price is right (right)
Said she know how to suck and she know how to fuck (how to fuck)
Don’t gotta tell me twice (twice), slide on her like Billie Jean
In the day time, go Mike Jack Thriller at night (night)
Ever call you baе for the day don’t mean I’m tryna make you a wifе (no)
Said she got bomb pussy and she said my dick is like dynamite (boom)
Had to cum two times (two times), we break up, make a fucking fight (fight)
Enjoy my life, this shit so awesome (awesome), ten years still flossin’ (flossin’)
I’m The Stone Cold Truth“ like Steve Austin (Austin)
You gotta problem like Austin, off a bean like Boston
I’m the bossy (ha) and my bitch so bossy (bossy)
Like Alys was here, no Game Of Thrones but this sluts be getting slaughtered (huh)
One day, I’ll have a daughter
Hope she don’t fuck with no rappers (no), but this girls like rappers
So they suck, they kiss their boyfriend after (ugh), girl, you so nasty
If I got a hundred dollars every bad bitch that passed me
I’d be Bezo daddy, T-Raww gladly
Get you diamonds, Birkin, Maggy, just don’t ex me
Tell me Sassy (Sassy), she a dog like Lassie (Lassie), bustin’ down on an ass chick
Now she ashy (ashy), Imma call you Ashley (Ashley), ass cash, Lil Cassie
Baby, don’t pass me, you know I ball like Messi (ya), set this dick game free
Gotta cash app me (ya), don’t tease and arrest me (ya), I like ‘em ratchet and classy (huh)
She wanna be Saweetie (ah), stack chains like Quavo (pow)
And we stack that bread like a Lego (aye)
Pop up with a toast like a Eggo (pop)
And a chain Canary like egg yolk (huh)
This shit so breezy, I killed it, I bleed it (haha)
She taking her off her Yeezy, she keeping on her CC (woah)
Go Bibi (go Bibi), back that ass up like beep-beep
She from D.C., keep it [?], shoutout Wale, no WALL-E
We wildin’ (wildin’, yeah), R.I.P. to the goat
Pop, pop with the smoke (smoke), to the moon, let it float (float, float, float)
Primis Player Placeholder

[Outro: DJ Drama & Tyga]
(W-w-well done)
You’re welcome! (R.I.P to the goat)
This subscription is all us
Hahaha
R.I.P. to the goat
To the moon, let it float
This shit so Tyga like, ten years later shit is like damn